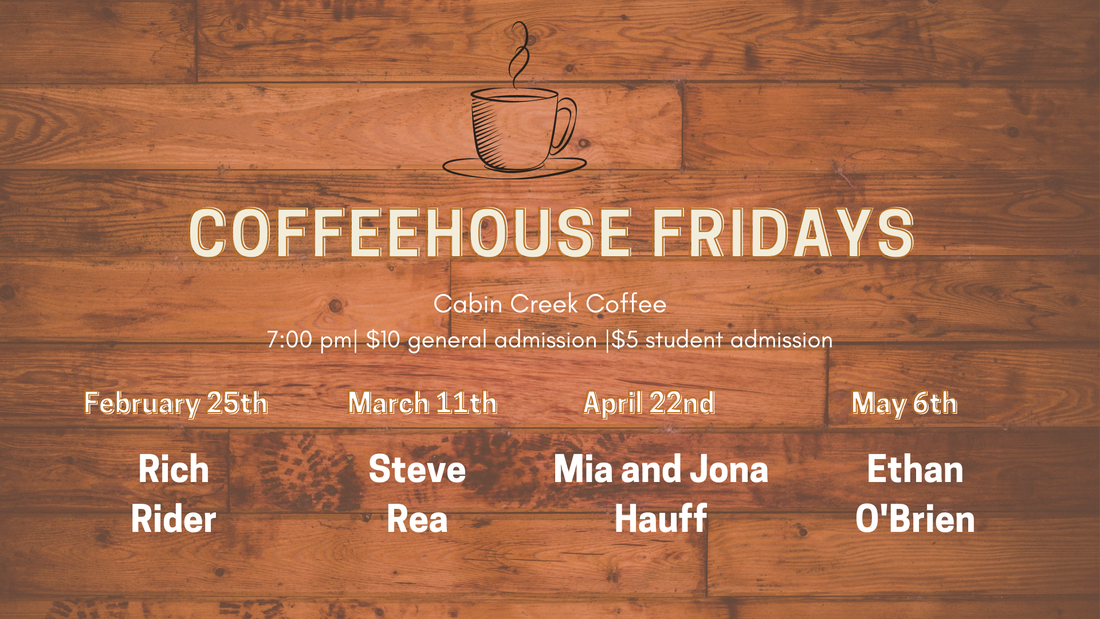 Join us at our 2022 series of Coffeehouse Fridays at Cabin Creek Coffee (201 N. Second Ave). for evenings of intimate, acoustic music from local musicians in a cozy, coffee house vibe. Performances start at 7 pm with doors opening at 6:30 pm. Drip coffee and tea will be available for purchase.

All funds raised will help us in our fire relief efforts at Thunder Bay Theatre.

Our series of Coffeehouse Fridays is supported in part by a grant provided by the Michigan Council for Arts & Cultural Affairs.

Rich Rider- Friday, February 25
Rich Rider is an artist, and self taught finger style guitar player. He is a singer /songwriter of original music. You can hear him play and see his artwork at local establishments around Alpena,

Steve Rea- Friday, March 11
With roots embedded in rock, blues, folk and acoustic genres, Steve performs original and cover music that tends to ignite a musical bon fire for listeners of all ages. As one watches Steve Rea perform it's not hard to tell that he feels every note and every lyric, whether it's an original song or someone else’s composition the approach is the same. "He's simply an artist and a damn good guitar player", is how one listener put it. Steve Rea’s music has graced numerous venues throughout the Midwest and has been showcased on WKLT radio's Northern Michigan Rocks compilation CDs, as well as the 2004 "Green Album" release. Thought provoking, lyrically sound songs with tasteful guitar riffs and rhythmic grooves would describe original compositions. Northern Michigan is home and where live outtings can be seen.  Steve has been a fixture at places like The Courtyard and The Fresh Palate in Alpena and The Hide-A-Way in Long Lake.   Whichever the format or the venue attendees can expect an energetic show filled with heavy doses of feeling and passion.

Mia & Jona Hauff- Friday, April 22
"I grew up in a very musical family and have fond memories of singing in our home with my two sisters, utilizing our mother’s brass candlestick holders for microphones. Now, I have the adventure of performing with my son, Jona Hauff. He’s an upcoming musician as a pianist/composer, and I’ll join in with vocals. Working from an eclectic repertoire, we are excited to be a part of TBT’s Coffeehouse Fridays." - Mia Hauff

“Besides playing the piano, I’ve also dabbled a little bit in singing, ukulele, and guitar. I was very fortunate that my parents were able to send me to a performing arts camp called Blue Lake Fine Arts Camp twice. It’s been an amazing experience getting out into the community, and I look forward to performing with my mom for one of TBT’s Coffeehouse Fridays."- Jona Hauff

Ethan O'Brien- Friday, May 6
O’Brien was born and raised in Alpena, where he listened to his parents’ records and learned how to play rock and roll. In elementary school, he started the local band Bobbing for Piranhas with Conor Larkin and James Daoust. Even though rock and roll is his favorite thing in the whole wide world, Ethan also enjoys sitting on a stool, strumming an acoustic guitar and singing pretty (he hopes) songs.